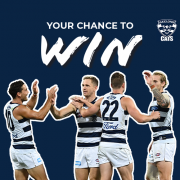 As the preferred medical imaging provider to the Geelong Cats, Lake Imaging and the Geelong Football Club are giving two lucky Cats supporters the opportunity to win:

For more information, call us on 9744 5344 or contact your GP. Further information about the screening can be found at vcgs.org.au